Automatic Backup for this Blog

Snowmobiler of the Year 2012 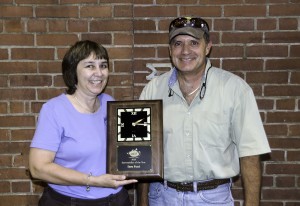 As I posted earlier David Fucci was awarded the Snowmobiler of the year for 2012. Dave has been an avid rider since the early 70’s.  Dave has put in countless hours over the past  years building and repairing our trails. Without him we would not have gotten corridors 4&7 open in 2010. Between his help of getting others with equipment to volunteer their time as he did to build part of the trail, helping secure permission from the City of Rutland, and at the last minute getting a bridge built. Then after Irene his equipment was out on the trails within a week and after 240+ equipment hours our trails were 99% open and ready for the season. Again at the last minute the Friday before Christmas 2011 one of our bridges was destroyed by a delivery truck. Dave went and inspected the bridge and picked up the materials. The day after Christmas we rebuilt the bridge for the second time after Irene. He helped us to purchase a 2006 Tucker Terra and new drag in 2010. He is a board of director in our club and very active in all aspects of our club. In the winter Dave rides and rides. Last year he had ridden 3500 miles as of mid February . Dave goes where the snow is if there is no snow here. I could go on and on but you can see from this that he was very deserving of the award and it is not only our club that he helps, he helps our neighboring clubs also. We are very proud to have Dave as a active member in the Shrewsbury Sno-Birds! Congrats Dave you deserve this award!