Dave Fucci heard that Rutland City was having a winter carnival. They wanted to put snow on Center Street and have sliding for anyone. Dave asked if we could spread the snow out with our Tucker. I told him we could but the snow that they were going to truck in would be too hard and icy for us to break up. Dave then went to David Markowski and asked for his help with a skidsteer with a soil conditioner to bust up the chunks of ice and snow. He was more than happy to help. With out his help it would not have been possible! So between the city employees, Dave Markowski, and the Shrewsbury Sno-Birds we made a sliding hill for the event. We started at 1:00 PM and it was all set by 4:30 PM.

We could see that it was not really firming up so Dave Fucci told them it would be better if they sprinkled some water on it to freeze it up.We took the Tucker home and I went back to get some photos and the City Fire Dpt. was spraying water on it. 15 minutes later and it was ready! They had to move some more hay bales down to the bottom because they were getting more speed. When I left around 6:30 there was a line of kids. When Dave stopped back around 9:00 he said that there was still a long line of people to slide down. It seems like it was a big success!

Here are some photos, some are better than others! 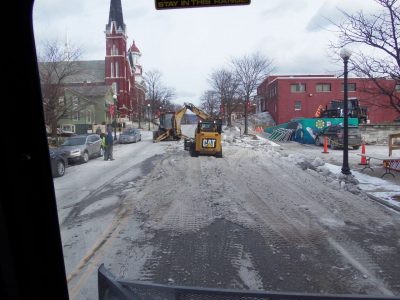 Now for the water!

Hope this stops them!

Waiting for the sledders 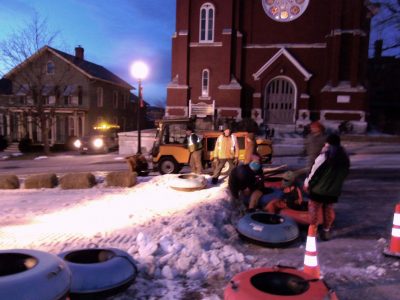 To fast for me to get the photo! 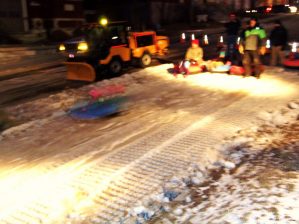 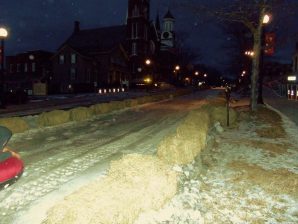 Getting ready for a fun night!